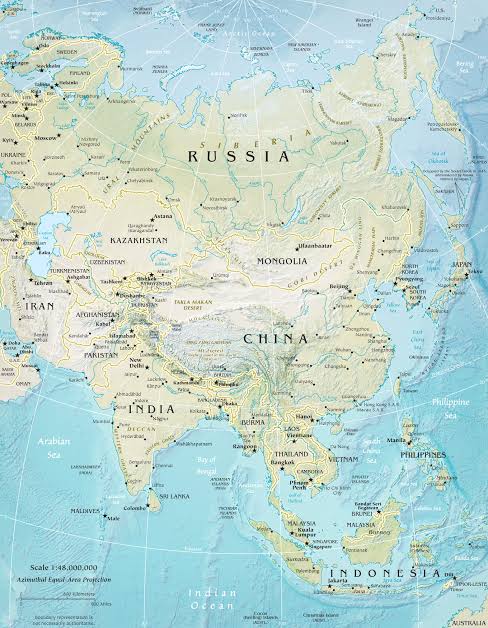 Facts In Brief About Asia

Asia, largest of the Earth’s seven continents, lying almost in the Northern Hemisphere. With outlying islands, it covers an estimate 44,391,000 sq km (17,139,000 sq mi ), or about thirty percent of the world’s almost total land area.

Its people account for three-fifths of the world’s population; in 2011 had an estimate 4.86 billion inhabitants.

Tigris River, Iraq : The Tigris River as it flows through Iraq. Present day Iraq occupies the greater part of the ancient land of mesopotamia, the plan between the Tigris and Euphrates rivers.

On the west, the boundary between Europe and Asia is drawn at the Ural Mountains, coutinuing south along the Ural River to the Caspian sea, then West along the Caucasus Mountains to the Black Sea.

Some geographers almost include Europe and Asia together in a large Eurasian region, noting that Western Asian countries, such as Turkey, merge almost imperceptibly into Europe.

Asiatic Black Bear : The Asiatic black bear is a medium-sized bear dwelling in a forest in Pakistan and in Korea and the island of Japan.

The bear is characterized by a black, Shaggy coat and a light-coloured mark on its chest.

Altay Mountain : The the Altay Mountains are located in Asia extending, from Russian Siberian in the north, through China, and into Mongolia.

The continental mainland stretches from the southern end of the Malay peninsula to Cape Chelyuskin in Siberia range .

The the continent’s greatest width from east to west is a thousand five hundred km (5,300 mi).

Mount Everest : In Himalaya range on the frontier of Tibet and Nepal is the highest mountain in the world. The lofty snow-covered peak risis about 8.9 km above sea level.

Lake Baikal : Lake Baikal is the deepest freshwater lake in the world and the third largest lake in Asia. A large variety of plant and animal life like different varieties of fish and turtles is found in its clear water. Many rivers, as well as more than 300 mountain streams, feed into the lake.

Saudi Arabia Desert : Saudi Arabia may be an arid country, but when rain fall it tends to come in violent torrents that can Couse considerable erosion.

The landscape is created by the rainwater carving out deep channels, or wadis, in the Earth and the rock being weathered by wind and dramatic daily temperature changes.

The soft rock has been worn away into sand while the harder rock remains and sharply rises from the deeply eroded tableland.