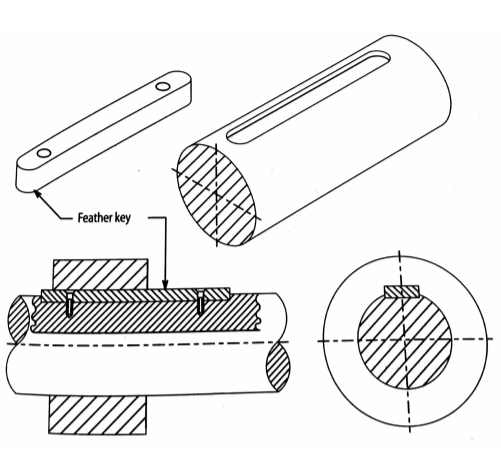 Feather key, which is fixed to the shaft by means of two Cap screws, having a countersunk head. In the hub, there is a clearance fit between the key and the keyway. Consequently, the hub is free to move or slide over the key. There is no relative rotational movement between the shaft and the hub.

So, the feather key transmits the torque and at the same time permits some axial movement of the hub. Feather keys are used where the parts mounted on the shafts are required to slide along the shaft such as clutches for gear shifting devices. It is an alternative to a splined connection.

The protecting part of the Woodruff key fits in the Keyway in the hub. Once placed in position, the key tilts and aligns itself on the shaft. The Woodruff keys are also relatively short and cannot carry the same load as longer keys can carry. So, they are used for light-duty applications and also mounting taper-bored components onto tapered shaft ends Woodruff Keys are used on tapered shafts in machine tools and automobiles.

The advantages of Woodruff keys are as follows:-
1) The woodruff key can be used on the tapered shaft because it can align by slight rotation in the seat.
2) The extra depth of the key in the shaft prevents its tendency to slip over the shaft.

The disadvantages of the Woodruff keys are as follows:-
1)In the extra depth of the keyway in the shaft increase stress concentration and reduces its strength
2)The key does not permit axial movement between the shaft and the hub.