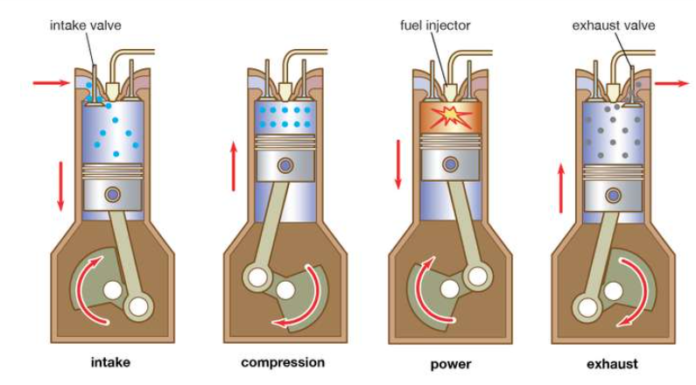 Compression-Ignition Engine is also called as Diesel Engine which is name after Rudolf Diesel, is an internal combustion engine. CI Engine works by compressing only the air, thus increase the temperature inside the cylinder to such a high degree that atomized diesel fuel injected into the combustion chamber Ignites by the fuel injector spontaneously.
The diesel engine has the highest thermal efficiency of any practical IC engine due to its high expansion ratio.
Diesel Engines can be designed as either two-stroke or four-stroke cycles.

It is heavier in weight and expensive too as compared to SI Engine. There is no need for a carburetor and the size of the engine is larger. The maintenance cost of the CI engine is high as compared to the SI engine.
Examples:- Car, bus, truck, etc.

So basically in four stroke CI engine there are 6 processes:-

SUCTION STROKE:-
It is also called an induction or intake stroke. The piston moves from TDC(top dead center) to BDC(bottom dead center) and the inlet valve must be open and the exhaust valve is closed. The fresh air enters from the inlet valve because the piston is moving down as air is being sucked in by downward motion against the piston.

COMPRESSION STROKE:-
During the compression stroke, the compression of air takes place when the piston moves from BDC to TDC. SO, in this stroke piston compresses the fresh air in preparation for ignition. Both the intake and exhaust valve remain closed during this stage.

The air which is occupied by the whole cylinder volume is now compressed up to the clearance volume. Just before the completion of the compression stroke, atomized fuel injected by the fuel injector. Fuel is ignited and the combustion takes place when the piston is at TDC.

CONSTANT VOLUME HEAT ADDITION:-
The piston will be stopped at TDC and both the valves remain closed. Heat addition will be at constant volume.

EXPANSION:-
This stroke is also called a POWER STROKE. The second revolution of the four-stroke cycle starts from here. At this point, a full 360-degree revolution has been completed by the crankshaft. The piston moves downwards by the explosion of charges. Due to the high pressure of burnt gases, the piston moves from TDC to BDC. The high-pressure air is being ignited when the fuel is injected by a fuel injector.

This stroke produces mechanical work from the engine to turn the crankshaft. So, the flywheel stores the power from this stroke and gives power to other strokes for completing the processes. Pressure and temperature decrease during this stroke.

CONSTANT VOLUME HEAT REJECTION:-
The piston will be stopped at BDC and both the valves remain closed. Heat rejection will be at constant volume.

Thinkitive Technologies Off Campus Drive 2022 – Freshers Must Not Miss

Thinkitive Technologies Off Campus Drive 2022 – Freshers Must Not Miss