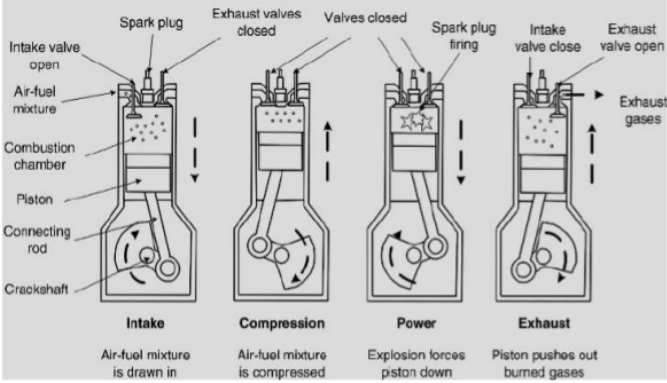 As we know, a spark-ignition engine is an internal combustion engine which is also called a Petrol engine. In the S-I engine, the combustion process of the air-fuel mixture is ignited by a spark plug. S-I engine is an Otto cycle engine. The working cycle of the SI engine may be two-stroke or four-stroke. Its thermal efficiency is less as compared to the CI engine.

So basically in four stroke SI engine there are 6 processes:-

SUCTION STROKE:-
It is also called an induction or intake stroke. The piston moves from TDC(top dead center) to BDC(bottom dead center) and the inlet valve must be open and the exhaust valve is closed. The fresh air-fuel mixture enters from the inlet valve because the piston is moving down as air is being sucked in by downward motion against the piston.

COMPRESSION STROKE:-
During the compression stroke, the compression of charge takes place when the piston moves from BDC to TDC. SO, in this stroke piston compresses the fresh air-fuel mixture in preparation for ignition. Both the intake and exhaust valve remain closed during this stage.

The charge which is occupied by the whole cylinder volume is now compressed up to the clearance volume. Just before the completion of the compression stroke, a spark is produced by the spark plug. Fuel is ignited and the combustion takes place when the piston is at TDC.

CONSTANT VOLUME HEAT ADDITION:-
The piston will be stopped at TDC and both the valves remain closed. Heat addition will be at constant volume.

EXPANSION:-
This stroke is also called a POWER STROKE. The second revolution of the four-stroke cycle starts from here. At this point, a full 360-degree revolution has been completed by the crankshaft. The piston moves downwards by the explosion of charges. Due to the high pressure of burnt gases, the piston moves from TDC to BDC. The air-fuel mixture is ignited by the spark plug.

This stroke produces mechanical work from engine to turn the crankshaft. So, the flywheel stores the power from this stroke and gives power to other strokes for completing the processes. Pressure and temperature decreases during this stroke.

CONSTANT VOLUME HEAT REJECTION:-
The piston will be stopped at BDC and both the valves remain closed. Heat rejection will be at constant volume.