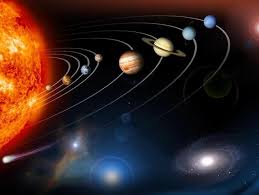 Solar system is a group of heavenly bodies consisting of a star and the planet and other objective orbiting around it.

We are most familiar with our own solar system which includes Earth, seven other major planet and the sun.

Our solar system also include many smaller object that revolve around the sun such as asteroids, meteoroids, and comets; and a thin cloud of gas and dust known as the interplanetary medium.

Solar system refer to the system that include earth and the sun. Nine major planets are currently known. They are commonly divided into two groups: the inner planets which are mercury, Venus, Earth and Mars and the outer planets are Jupiter, Saturn, Uranus and Neptune.

Mercury is the planet nearest to the sun. It has a diameter of 4,878 kilometres about two-fifths the earth’s diameter.

Mercury’s mean distance from the sun is about 57.9 million kilometres, compare with 108,230,000 kilometres for Venus, the second closest planet.

Because of Mercury’s size and nearest to the brightly shining sun, the planet is often hardly to see from the earth without a telescope.

Venus is known as Earth’s “twin sister” because the two planets are so similar in size. The diameter of Venus is about 12,100 km approximately, 644 km is smaller than that of earth.

No other planets come nearer to the Earth than Venus. At its closest approach, it is about 41.4 million km away. As seen from earth, Venus is brighter than any other planet or an even any star.

The mean distance of the earth from the sun is 149,503,000 kilometres. It is only planet known to support life, although some of the other planets have atmosphere and contain water.

The diameter of the earth, measure around the equator, is about 12756 kilometres.

Mars is reddish in colour. Mars is the fourth closest planet to the sun, and the next planet beyond the earth.

At its closest approach to the Earth, Mars is 55,700,000 kilometres away. The diameter of mass is about 6,796 kilometres, a little over half that of the earth.

Jupiter is the largest planet in the solar system. Its diameter is 142,984 kilometres, more than 11 times that of Earth. It would take a more than 1,000 earth to feel up the volume of the giant planet.

When viewed from Earth, Jupiter appear brighter than most stars because of its huge size .It is usually the second brightest planet-after Venus.

Jupiter is the fifth planet from the sun after Mars. Jupiter is a giant ball of gas and liquid with little, if any, solid.

Saturn is the second largest planet. Saturn has seven thin, flat rings around it. The rings consists of numerous narrow ringlets,which are made up of ice particle that travel around the planet.

The gleaming rings Make saturn one of the most beautiful object in the solar system. Saturn’s diameter at its equator is about 120,540 kilometres, almost 10 times that of the earth.

Uranus is the seventh planet from the sun. Uranus is the farthest planet that can seen without telescope. It’s mean distance from the sun is the about 2,875,000,000 kilometres distance that takes light about 2 hours 40 minutes to travel.

Uranus is giant ball of gas and liquid its diameter to raise 51,118 kilometres, more than four times the diameter of earth. The surface of uranus is not solid.

Neptune is a major planet in the solar system, eighth planet from the sun and the fourth largest plant in diameter.

Neptune is about 30 times as far from the sun as is Earth from sun. Neptune diameter is about 49,100 kilometres, or almost four times that of the earth.

The planet is about 17 times as massive (heavy) as earth, but not so dense as earth. Neptune travel around the sun in an electrical (oval-shaped) orbit.

Its mean distance from the sun is about 4,504,300,000 kilometres. Neptune goes around the sun once about every 165 eart-years, compared to once a year for Earth.