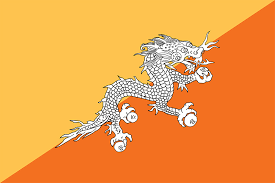 Facts In Brief About Bhutan

The square flag is divided diagonally into yellow and orange halves and a White dragon in the centre has a jewel in each claw.

The yellow-orange colour, which the Bhutanese government officially described as yellow, is symbolic of the power of the king, as head of the secular government, while the orange-red is associated with the (kagyupa) and (Nyingmapa) Buddhist sects and with the religious commitment of the nation.

Bhutan is kingdom of South-Central Asia, located on the eastern ridges of the Himalayas. The country has an area of about 18,150 square miles (47,000 square kilometers).

Bhutan’s undefined Northern and western boundary with Tibet , China follows the crest of the Great Himalaya Range for the most part.

Bhutan’s q boundary with India lies to the south of the Himalaya Range in the Duars Plain. Directly south lie the Indian state of West Bengal and Assam.

To the east, Bhutan border Arunachal Pradesh and to the Southwest it borders the Indian state of Sikkim. Thimphu is the capital.

Thimphu is the capital and major urban centres of Bhutan. The Tashichho dzong, located in Thimphu, holds government offices.

Bhutan which means “Land of the Thunder Dragon”, derived its name from the violent storms that doesn’t from the Himalaya.

The Bhutanese economy is mainly agrarian; most of the population is engaged in agriculture and livestock raising.

The amount of land available for agriculture is only a fraction of the total area of the country, however, and an adverse climate, poor soil and steep slopes have made it necessary to leave a large land area covered with forest growth area, and grasslands.

The relatively low, well-water, and fertile valleys of Central Bhutan have the largest percentage of cultivated land.

Because of the great variation in altitude and climate, a variety of crops is grown in Bhutan. Rice, corn (maize), potatoes, citrus fruit like lemon etc. and wheat are the chief crops. Yaks, cattle, sheep, and horses are raised on Bhutan’s scattered pastures.

Bhutan’s two largest ethnic group, the Sharchops and Ngalops, make up more than half of the population. The Ngalops are descendants of Tibetan settlers.

The Sharchops’ origin is uncertain but they may have come from Tibet long ago. The two groups are sometimes known together as the Bhotes and bhutias. About a quarter of Bhutan’s people are Nepalese. Several languages are spoken in Bhutan. Dzongkha, a Tibetan dialect, is the official language.

The fertile Paro valley in western Bhutan is tucked beneath The soaring Himalaya. To protect Bhutan from Tibetan invaders, the 17th-century Drugyal Dzong (Victorious fortress) was built on a site 2,530 metres above sea level.

The valley contains wheat fields, mixed forests, and some of Bhutan’s finest pastureland, which is used for grazing yaks.

The Dzong of Punakha was built in 1637 at the junction of the Pho Chu and Sankosh rivers in west-central Bhutan.

Dzongs served as fortresses, temples, and monasteries from which surrounding territory was ruled. White-and-red dzongs in Bhutan are characteristic of 12th-century Buddhist sect.

The Dzong of punakha contains many important temples, including the burial chamber of the great 17-century ruler Ngawang Namgyal.