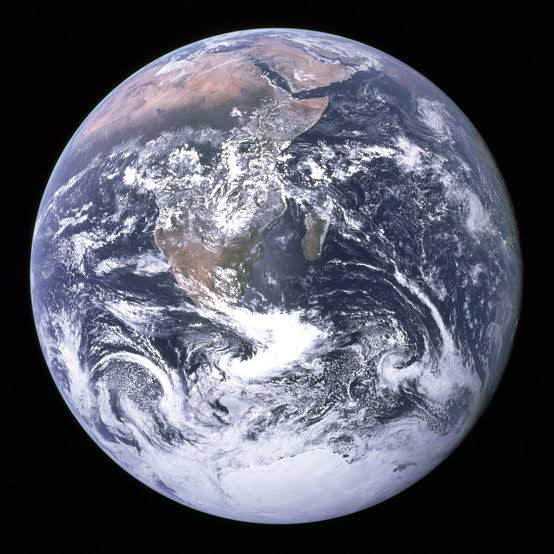 Motion: Rotation(spinning motion around an imaginary axis connecting the North and South poles) once every 23 hours , 56 minutes, 4.09 seconds.
Revolution (motion around the sun) – ones every 365 days, 6 hours, 9 minutes, 9.54 seconds.

Earth means many things to the people who live on it. To a farmer, Earth is soil. To a road builder, Earth means mountains of hard rock. For a sailor , earth is water as far as the eye can see. An astronaut speeding through space is the Earth’s round shape, the outline of lands and ocean, and the clouds that covers them.

Each of these different views help describe the earth but none of them really tells exactly that the Earth is. The earth is a huge sphere (ball), whose surface is made up of rock, soil, and water. It is surrounded by air. The earth is one of the ninth spinning planets that travel around the sun through the space along paths called orbit.

The planet earth is the home of human being and many other living things. Animals and plants live most everywhere on the earth surface. The earth has plenty of water which covers most of the Earth’s surface.

A thin layer of rock called The crust from the Earth’s surface. All life on the earth is found on the crust or in the water that covers about 70 per cent of it.

Beneath the crust is hot rock. A ball of molten metal lies at the centre of the earth.

The earth is always moving. It is spins like a top and also travel around the sun at the same time.

we use this two motions of the earth to measure the length of days and years. One day is the time the Earth takes to spin around once.

One year is the time the Earth takes to travel once around the sun.

Outside And Inside The Earth:

The Earth’s Crust : Continents and ocean basins are part of a rocky “skin” that surrounds the main body of the earth. This is skin is called earth’s crust.

Temperature within the deepest part of the crust may reach 870 degree Celsius hot enough to melt rocks.

The crust is made up of three kinds of rock :

Igneous Rocks :- Igneous Rocks formed when melted rock deep inside the crust cools and hardens- or erupts at the surface as lava.

These materials were worn away from the land. Then they collected in low places, layer upon layer, and harden into rock.

Metamorphic Rocks:- metamorphic rocks are formed deep in The crust when igneous and sedimentary rocks are changed by heat and the weight of the crust pressing on them.

Rock formation is a slow process that has been occurring throughout geologic time.