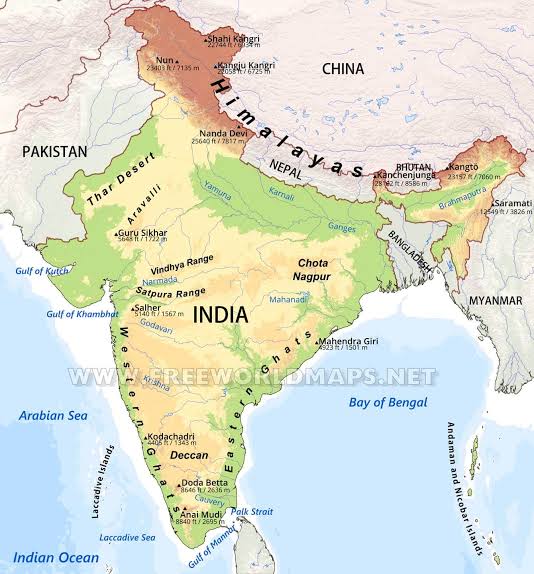 The Indian peninsula forms a rough triangle on the north by the world’s highest mountain, the Himalayas. And on the east, south, and west by ocean.

Its topography varies from the barren dunes of the Thar Desert to the dense tropical forest of rain-drenched Assam state.

Much of India, however, consists of fertile river plains like Ganga , Indus etc and high plateaus. Several major rivers, including the Ganges, Brahmaputra, Yamuna, Narmada, Gomti, Krishna and Indus, flow through India.

Arising in the northern mountains and carrying rich alluvial soil to the plains below, these mighty rivers have supported agriculture-based civilization for thousand of years.

Land And Climate In India

Most of Northern India a low-lying plain that includes the valleys of the Ganges and Brahmaputra rivers. Himalaya rises in the far Northern parts of the country.

Groups of rugged hills in extreme eastern India-near Myanmar and the Eastern parts of Bangladesh. Large triangular peninsula that forms India is plateau with slopes dropping down to coasts.

Cattle In India :- India has more cattle than any other country in the world. As a central part of India’s agrarian economy, cattle haul carts, plow fields, and produce milk for dairy products.

considered sacred by many Hindus, cattle are protected from slaughter in most states. And they often allowed to roam free.

Mild temperature in Northern and Central India from October to February; in far north, temperature occasionally drop below freezing.

Southern India lacks true cool season, but October to February not so hot as rest of the year. Northeast and West coast receive heavy rainfall.

Indian Gavial :- The Indian gavial, found only in the Brahmaputra, Ganges, and Mahanadi river of India and the Koladon rivers of Southeastern Asia, is differentiated from all other species of crocodilians by its long, Narrow snout and weak legs.

Growing to a size of 7 m (23 ft), the gavialis feeds premarily on fish.

Indian One-Horned Rhinoceros :- Established in 1908 to protect the nearly extinct Indian One-Horned rhinoceros, the kaziranga wildlife sanctuary, in Assam state, India, now contains about 1000 of the animals, as well as many other endangered species.

India consist Geographically of the entire Indian peninsula and portion of the Asian mainland. The length of India from north to south is 3,050 km; from east to west it is 2,950 km.

India also has two Island chains, each forming its own union territory in India. The First on is The Andaman and nicobar Island chain lies east of the mainland between the bay of Bengal and and the Andaman sea.

And the second on is The Lakshadweep island group is located off India’s Southwest coast.

India can be divided into three main regions:

South and parallel to the Himalayas lies in the Gangetic Plain, a belt of flat, alluvial lowlands 280 to 400 km wide.

This area includes some of the most agriculturally productive land in India and the Indian portion of the broad Gangetic Plain encompasses several River system.

In the southern part of Peninsular India lies the vast Deccan Plateau, a tableland lying within a triangle formed by the satpura range, the steep mountain slopes of the Western Ghats, and the gentler slopes of the Eastern Ghats.

The Indian subcontinent’s three great Northern rivers, the Indus, the Brahmaputra and the Ganges, The Son Rivers flow through India.