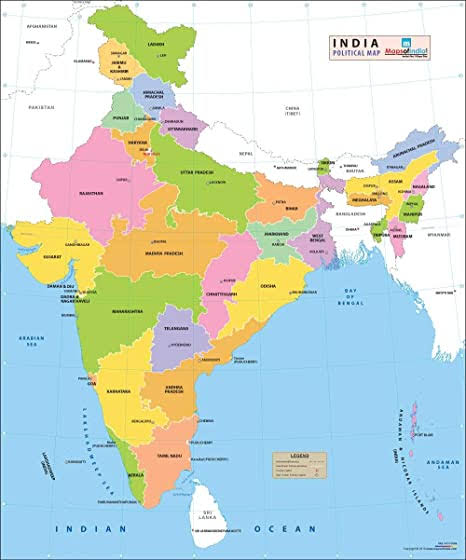 Facts In Brief About India

India’s Flag was adopted in 1947. It was horizontal stripes of orange-yellow, white and green. The wheel is an ancient symbol called the Dharma Chakra or Ashoka Chakra ( Wheel of Law ).

The Indian national emblem is copied from a pillar built by Ashoka, an ancient Indian emperor. The words in Sanskrit beneath it mean Truth or satya alone triumphs.

India is country that occupies the very big part of South Asia. It is a constitutional Republic consisting of 28 state, each with a substantial degree of control over its own affairs, and 8 less fully empower union territories.

The capital is New Delhi. With more than one sixth of world’s total population, India is the second most populous country, after China and the growth rate of population in India is more than China.

In area, India ranks as the seventh largest country in the world, covering 1,222,243 square miles. About 73% of India’s people live in rural areas. About 27% of the people live in urban areas.

About 80% of the farmland is used to grow India’s main food-grains and pulses, the seeds of various pod vegetable, such as beans, chickpeas, and pigeon peas.

Indian plants refine petroleum and produce many industrial chemicals like, dyes, medicines, fertilizers and pesticides and many more.

India also has a good supply of coal. Petroleum accounts for about 50% of the yearly value of all the minerals mine in India and coal account for about 40%.

Most of the country’s coal from the state of Bihar and West Bengal. Petroleum is produced from wells in the Indian Ocean of the coast from Mumbai and from inland deposits in Assam.

The Taj Mahal designed as a tomb by Shah jaha for his wife of a 17th-century Mughal emperor, was constructed by about 20,000 workers from 1632 to 1648 in Agra, a city in Northern India.

The massive domed structure was constructed in the Indo-Islamic style, using white marble and inlaid gems. The bodies of the emperor and his wife remain in a vault below the building after their death.

located in Amritsar, a city in the Punjab state of North Western India, the golden temple serves as the most important house of worship for the sikhs.

Originally built in 1604, the temple sustained repeated damage from attacks by Afghan invaders and different wars. During the early 19th-century reign of Maharaja Ranjit Singh, the temple was rebuilt using marble, copper, and an overplay of gold foil.

The temple sits on a small Island and connects with land on the west by the way of a marble causeway.

Jama Masjid, also known as the Great Mosque, is located in old Delhi, India. Jama Masjid is also known as Friday mosque. The country’s largest Mosque, it was constructed under the leadership of Shah jahan in 1644.