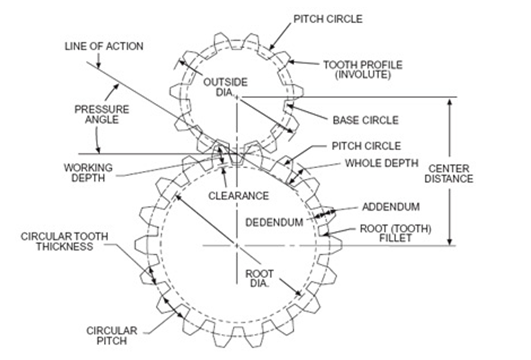 Gears can be defined as toothed wheels or multi-lobed cams, which transmit power and motion from one shaft to another shaft by means of successive engagement of teeth.

The disadvantages of gear drives:–

The teeth of helical gears are cut at an angle with the axis of the shaft. The involute profile of helical gear is similar to that of spur Gear. But this involute profile is in a plane, which is perpendicular to the tooth element. So, the magnitude of the helix angle of pinion and gear is the same, however, the hand of the helix is the opposite. In a helical gear, a right-hand pinion meshes with a left-hand gear and vice versa.

The shape bevel gear is like a truncated cone. The size of the gear tooth, including the thickness and height, decreases towards the apex of the cone. Bevel gears are normally used for the shafts, which are at right angles to each other. Thus, however, is not a rigid condition and the angle can be slightly more or less than 90 degrees. The teeth of bevel gears can be straight or spiral.

The worn gears consist of a worm and a worm wheel. The worn is in the form of a threaded screw, which meshes with the matching wheel. The threads on the worm can be single or multi-start and usually have a small lead. As we know the worm gear drives are used for shafts, the axes of which do not intersect and are perpendicular to each other. The worm imposes a high thrust load, while the worm wheel imposes a high radial load on the shafts. Worm gear drives are characterized by high-speed reduction.