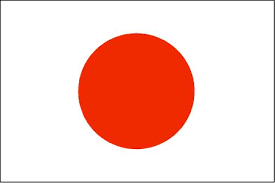 Japan’s flag, adopted in 1854, is a red sun on a white background. The Japanese call the country Nippon or Nihon, meaning source of the sun.

The Imperial Mon (badge) consists of a chrysanthemum with 16 petals. This is symbol of the Imperial family dates back hundreds of years.

Japan is an island country in the North Pacific Ocean. It lies off the east coast of mainland Asia across from Russia, Korea and China.

Four large Island and thousands of smaller ones make up Japan. The four major Island- Hokkaido, Honshu, Kyushu, and Shikoku – from a curve that extends for about 1,900 Kilometres.

About 127 million people are crowded on these Islands making Japan one of the most densely populated countries in the world.

Mountains and Hills cover most of Japan making it a country of great beauty. But the mountains and hills take off so much area that the great majority of the people live on a small portion of the land- Narrow plains along the coast.

This coastal plains have much of Japan’s best farmland and most of the country’s major cities.

Most of the people live in urban areas. Japan’s big cities are busy, modern centre of culture, commerce and industry. Tokyo is the capital and largest city.

Japan is one of the world’s economic giants. Its total economic output is exceeded only by that of the United States.

The Japanese manufacture by a wide variety of products, including cars, computers, Steel, television sets, textile and tyres.

The country’s factories have some of the most advanced equipment in the world. Japan has become a major economic power even though it has a few natural resources.

Japan imports many of the raw material needed for industry and export finished manufactured goods.

Winters are mild in the south and cold and snowy in the north. Honshu, Japan’s largest island has an area of 227,414 square kilometres. About 80% of the Japanese people live in Honshu.

Japan has a wide variety of minerals but supply of most are too small to satisfy the nation’s need. The chief mining products are coal, copper, lead, limestone manganese, silver tin and zinc.

Japanese Kimonos :- The Kimono, a robelike dress, is the traditional garment of Japan. Though most Japanese now wear western-style clothing, they wear kimonos on holiday and other special occasions.

These women have wrapped their kimonos with a sash called and obi.

Modern Japanese Agriculture :- Since most farms in Japan are very small, Japanese manufacturers have developed compact agricultural machinery to work the field.

Here on southern Honshu Island in a rural area near Hiroshima, a farmer harvest rice using a small machine that both cuts and bags the rice.

Himeji Castle, Japan :- Himeji castle in Hyogo prefecture, Japan, was originally built in the 14th century but was rebuilt in its present from in 1609.

The building is made of wood coated with white plaster. The high rock wall on which the castle sits was necessary to protect the inhabitants from firearms, weapons that had recently been introduced to Japan from Europe.