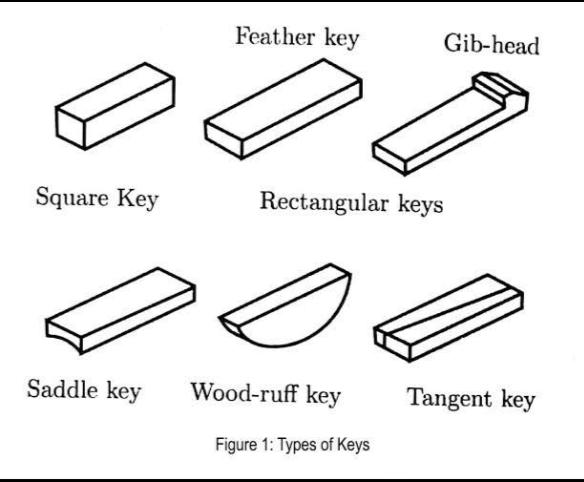 Keys are a machine element, which is used to connect the transmission shaft to rotating machine elements.
For example- Pulley, Gears, sprocket, or flywheel.

The two basic functions of the key are as follows:-
1) The key is to transmit the torque from the shaft to the hub of the mating element and vice-versa.
2) The key is to prevent relative rotational motion between the shaft and the joined machine element.

A slot machine on the shaft that accommodates the key is called the keyway. The main drawback of the keyway is stress concentration in the shaft and the part becomes weak. Keys are made up of plain Carbon Steel in order to withstand shear and compressive stresses resulting from the transmission of torque.
There are different ways to classify the keys:-

Advantages of saddle key:-
Saddle keys are used for light-duty and low power transmission as compared with sunk keys.
The cost of the saddle key joint is less than that of the Sanki joint.

Disadvantages of saddle key:–
It has a low Power transmitting capacity.
It can’t be used in heavy-duty applications.

That’s why square keys are used in general industrial machinery. Flat keys are most suitable for machine tool applications, where additional stability of the connection is desirable.

Advantage of the sunk key:-

The sunk key is for heavy-duty applications only.

The disadvantage of sunk key:–