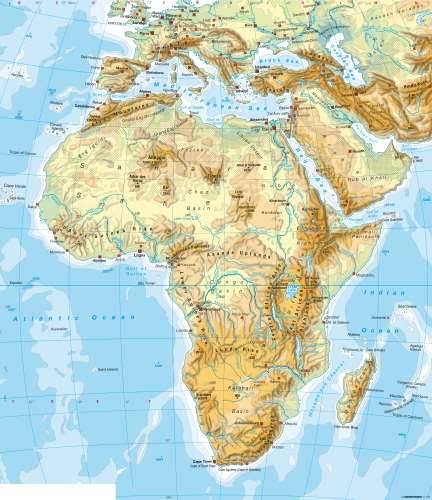 Africa is the second largest continent in area and in population. Only Asia covers a large area and has more people.

Africa covers about a fifth of the world’s land area and has about in eighth of its people. Africa is divided into 53 independent countries and several other political units the largest country Sudan, has an area of 2,505,813 Square kilometres.

Village on the Nile, Sudan : The Nile river is the most dominant physical feature in Sudan. Because water is a valuable resource in the east African countrie’s arid regions, the Nile and its tributaries are valued for providing much of the irrigation that sustains agriculture development.

Small villages, such as this Shilluk settlement, use water from the river for subsistence farming.

The smallest country, Seychelles, has a land area of only 455 square. kilometre. The most heavily populated African nation, Nigeria has more than 125 million people.

However, about two fifth of all African countries have fewer than 5 million people each.

The African continent is an in immense plateau, broken by own few mountain ranges and bordered in some areas by a narrow coastal plains.

It is a land of striking contrasts and great Natural wonders. In the tropical rainforest of Western and Central Africa, the towering treetops from a thick Queen canopy.

Most of Africa’s other major rivers, including the Congo and the Niger, empty into the Atlantic. Much of the continent is grassland.

Elephant, giraffe, lions, zebras and many other animals live in the grassland located in eastern and Southern Africa.

Rapid and waterfalls make navigation difficult on many African rivers. But they provide the continent with about 15% of world’s potential water power.

Hydroelectric power project have been built on a number of rivers. Some projects also provide irrigation water and flood control.

Several waterfalls including The spectacular Victoria falls on the Zambezi, are popular tourist attractions.

Africa can be divided into two major and land regions:

Low Africa consists of Northern, Western, and Central Africa. Except for a few coastal plains and mountain ranges, most of the region lies from 152 to 610 metre above sea level.

Heigh Africa consists of eastern and Southern Africa. Most of the region is more than 910 metres above sea level.

Niger Delta, Nigeria : The Niger River enters Nigeria from the Northwest, crossing the western part of the country to join Atlantic ocean in the south.

Near the coast, the river forms this Delta with mangrove forest, lagoons and swamp stretching about 100 km inland.

The Niger Delta is the largest in Africa, covering an area of about 36,000 square kilometre.

They subsist as nomads by gathering wild plants and fruits from the sparse vegetation of the region and by hunting for meat.

Algerian Sahara : The Algerian portion of the Sahara, which was named after the Arabic word for desert, Sahra, covers more than 90% of the country’s land area.

Beneath the gravel and sand of the Sahara’s surface lie major oil and natural gas deposits that contribute to Algeria’s position as one of the wealthiest nation in Africa.