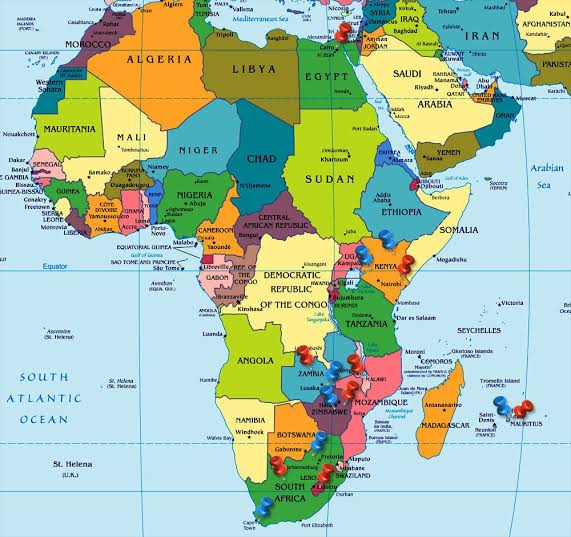 Africa, the second largest continent, after Asia, covering about one-fifth of the total land surface of the Earth.

The continent is bounded on the north by the Mediterranean sea and on the west by the Atlantic Ocean, on the east by the Red Sea and Indian Ocean and on the south by the mingling waters of the Indian oceans and Atlantic ocean.

Bisected by the equator, the expensive land mass encompasses the Sahara, which is the world’s largest desert and the Nile, the longest river on Earth, as well as 54 Nations.

Africa has a fairly regular coastline, characterized by few indentation, that rises sharply to a vast, rolling plateau mark by a number of large, saucer-shaped basins.

In 2000 some 13% of the world’s population, an estimated 797 million People, lived in Africa, making it the world’s second most populous continent, after Asia.

In the Northeast, Africa was joined to Asia by the Sinai peninsula until the construction of the suez canal paradoxically, the coastline and of Africa- 18,950 miles in length-is shorter than of Europe, because there are few inlets and few large bays or gulfs.

Off the coast of Africa and number of Islands are associated with the continent, of which Madagascar, one of the largest islands in the world, is the most significant.

Africa contains an enormous wealth of mineral resources, including some of the world’s largest reserves of fossil fuels, metallic ores and gems and precious metals.

The richness is matched by a great diversity of biological resources that includes the intensely lush equatorial rainforest of Central Africa and world-famous population of wildlife of the eastern and Southern portion of the continent.

Art And Culture Of Africa

This women from Botswanan is wearing a colourful dress made of different pieces of fabric sewn together.

Some of the design on the patches are made in the traditional batik method, but this dress is contemporary.

This bedouin people come from Egypt. They wear clothing that keeps them cool in the hot climate and is in keeping with their Muslim faith.

The loose clothing, turban, burnoose, and shawl are all common items of clothing in the desert.

A bronze sculpture from Nigeria is an image of a priest king of a civilization once centred at life. The people use sculpture of former king in ceremony honouring the dead.

Herero Women have adopted fashion introduced by missionary from the nineteenth century as their own traditional dress Victorian dress.

Victorian dress was popularized by European Christian missionaries who came to Africa in the late 19th century along with colonist eager to make use of the continents wealth of natural resources.

In the west African nation of Benin many people practice animism, the belief that all thing in nature process souls.

Some forty two different ethnic group are native to benin, but most people are from the closely related to Fon Adja clans.