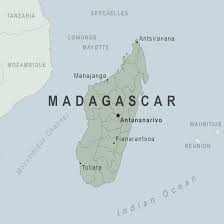 Facts In Brief About Madagascar

A white vertical strips appears at the left, with a red horizontal strips over a green one at the right. White is for purity, red for sovirginity and green for hope.

It is nation occupying the island of Madagascar, the world’s fourth largest Island, lying off the south east coast of Africa in the southwestern Indian Ocean.

Madagascar Island extend about 976 miles from Southwest to North East and is about 355 miles and its widest extent from east to west.

It lies almost entirely within the tropics. The island of Madagascar is separated from the African coast by the 250-mile wide Mozambique channel.

The coastline of the island is some 2,480 miles in length. The capital is Antananarivo. Area, including several minor adjacent Island, 226,658 square miles.

Madagascar consists of three parallel longitudinal zones the Central Plateau, the coastal strip in the east and the zone of low plateaus and plains in the west.

Some coastal shipping uses the Ampanalana Canal, which runs along the east coast between Mahavelona and farafangana.

The climate is warm and humid on the coast. The southern end of the island is mainly desert and has a hot, dry climate.

Madagascar has or developing economy. About three quarters of the people are farmers and herders. Rice is there chief food crop.

Bananas, cassava and sweet potatoes are also grown. Cattle are the countries most important livestock. Coffee is the chief export.

Madagascar is the world’s greatest producer of natural vanilla and cloves. Other exports include sugar and sisal, which is used to make binding twine.

Bauxite, chromite, coal and graphite are mined in Madagascar.

Madagascar : Madagascar was once covered with forests, but its tree have now been felled to provide fuel, building materials, timber for export, and Agriculture and grazing land.

Lemurs : Lemurs are the best known wild animals of Madagascar. They are relatives of monkeys. Luke much of the country’s wildlife Lemurs live only on Madagascar and the nearby Comoros Island.

Christinity In Africa : The Faravohitra church in Antananarivo reflect the fact that more than 40% of Madagascar population is Christian.

The capital city is located in medical store Central Highlands midway between the island’s northern and Southern tips. Antananarivo is built on 12 steep hills.

Nile Crocodile : Crocodylus niloticus The Nile crocodile, which can weigh as much as one metric ton and can measure 6.5 metre in length, has killed more people on African continent than any other animals.

These mammoth reptiles feed mainly on fish and inhabit rivers, lakes, marshes and coastal areas in Africa South of the Sahara and Madagascar.