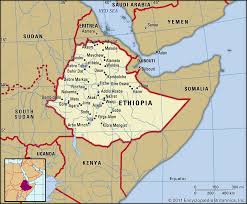 Facts In Brief About Ethiopia

The national flag flown by the people consists of three horizontal strips- green, yellow and red (top to bottom).

The state flag used by the government, is the same but the Ethiopian coat of arms appear in the centre.

Ethiopia is landlocked country on the horn of Africa. It’s total area is 437,600 Square miles.

It Shares frontiers with Eritrea to the North, Djibouti to the northeast, Somalia to the east, Kenya to the south and Sudan to the west and Northwest.

The capital is Addis Ababa, located almost at the centre of the country.

The production and export of cash crops such as coffee were advanced and import-substituting manufacturers search textiles and footwear were established.

The Derg regime, which ruled from 1974 to 1991, nationalized all means of productions, including land, housing, farms and industry.

Most Ethiopian farmers produce goods chiefly for their own use. The main crops include wheat, maize, sorghum and a grain called teff.

Many farmers in the south west produce coffee for sale. Other crops grown for sale include cotton, oil seeds and sugarcane.

Most Ethopian farmers also rear cattle, goats, sheep and chickens. Farmers make use of only a smart part of the land suitable for agriculture in Ethiopia.

Although soil erosions, overgrazing and deforestation have seriously damage to the produce nearly half the potential cultivable land is still available for future use.

In addition, Ethopia is the richest country in Africa in number of livestock, including cattle.

Ethiopia has many large rivers, but with the exception of the Awash, they have yet to be exploited fully for hydroelectric power and irrigation.

The role of minerals in Ethiopia’s economy is also a small. Only gold and platinum are of significance.

However, there are potential for copper, potash, lead mangense, aluminium, chromium, cobalt, Sulphur and many others.

Ethiopia’s Africa Hall : Africa Hall, in the Ethiopian capital city of Addis ababa, was the site of a pivotal 1963 meeting of a African heads of state that resulted in the formation of the 52-member organisation of African unity ( OAU ).

It is also headquarter of the Economic Commission for Africa (ECA), a regional commission of the United nation (UN). Economic and social council that promotes economic development.

Inside the building is a collection of distinctive murals on glass, as well as African artwork.

Located in the centre of the country, the city is a major commercial centre and has one of the largest open air market in Africa, the mercato.

Ethiopia’s Vast Plateau : Mountain villagers walk in the women Mountain N.P. of Ethiopia. Much of the country is covered by the Ethiopian Plateau, which has abundant rainfall and the country’s best farmland.

The great rift valley divides the plateau into two large section and high mountain ranges and deep river gorgeous for the divided Ethiopia the highest peak Raj Dashen, is part of the Simen Mountains.