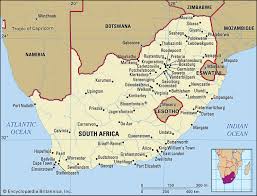 Facts In Brief About South Africa

South Africa is this southern most country on the African continent. It occupies only about 4% of the continents area and has only about 6% of its people.

South Africa is bordered by Namibia (Northwest), Botswana and Zimbabwe (North), Mozambique and swaziland (north-east and East), the Indian Ocean (southeast) and the Atlantic ocean (southwest).

The country entirely surrounded the independent state of Lesotho. South Africa’s executive capital is Pretoria, its legislative capital is Cape Town, and its judicial capital is Bloemfontein.

The country has five land regions:

South Africa’s longest river is the orange river. It begins in Lesotho and flows westward about 2,100 km into the Atlantic.

South Africa is the richest and most economically developed country in Africa. South Africa produces more gold than any other country.

It’s farmers produce almost all the food needed by the people. The country’s mines and farms also produce nearly all the raw materials needed for industry.

South Africa’s factories provide most of the countrie’s clothing, precedes foods, and machinery.

South Africa is one of the world’s chief sheep-raising countries and wool is its main agriculture export. Other leading farm products include beef and their dairy cattle, chickens, eggs, milk and wine.

Pretoria, South Africa : The parliament building in Pretoria, the administrative capital of South Africa, are characteristic work of the architect sir Herbert Baker, who designed building in many British commonwealth countries.

Johannesburg City Centre : The discovery of gold in the Witwatersrand in the 1880s brought people and business to the Transvaal highveld.

After its beginning during the gold Rush, Johannesburg become South Africa’s largest city, situated at the centre of Southern Africa’s densest population cluster.

Fastest growing Durban City : The Indian ocean port of Durban is the Eastern KwaZulu natal province is the third largest city in South Africa and one of the fastest growing urban areas in the world.

The Cape Peninsula : Mountains plunge straight into the sea along both the Atlantic and the Indian Ocean coats of the Cape peninsula is in South Africa.

Smitswinkl Bay is one of several small, isolated bays around the perimeter of false Bay, which is on the sparsely populated East side of the Peninsula south of the Cape Town.