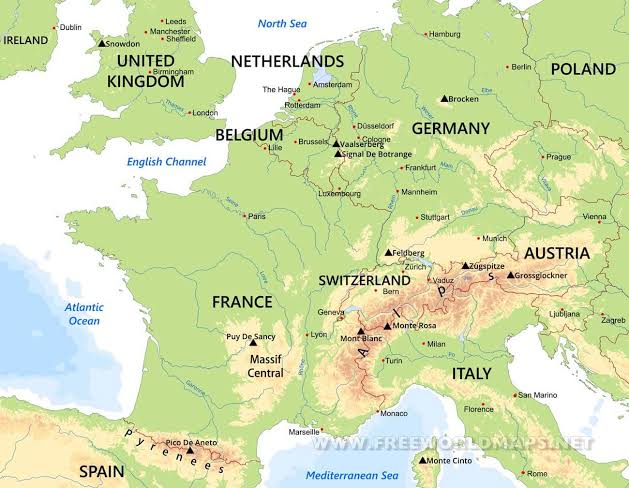 Europe is the berthplace of Western Civilization. No other continent has had such great influence on world history.

From the time of the ancient greeks, European political ideas scientific discoveries, arts and philosophies and religious believes have spread around the world.

The civilization of the new World including Australia and New Zealand and North and South America developed largely from European civilization.

The many cultural landmarks and natural beauties of Europe attract visitors from all part of the world. Exhibits in museums such as the Louvre in Paris thrill art lovers.

Masterpieces of architecture include the temples of ancient Greece and Rome and the cathedral of France, Germany and Italy.

London is rich in history and royal pageantry, with famous palaces and government buildings. Europe’s historic Rhine Riverveins past steep cliffs dotted with the ruins of castles built hundred of year ago.

Among the continent’s many other attraction are the snow-covered Alps of Switzerland, and colourful tulip fields of the Netherlands, the canal of Venice and the sunny beaches of the Riviera.

Europe covers 10,398,000 square kilometre, or about one-fiftinth of the world’s land area. It is the smaller than every other continent except Australia.

The Atlantic ocean forms Europe’s Western boundary. The Ural Mountains, the Ural River and the Caspian Sea from the eastern boundary of the continent.

Europe extend from the Arctic Ocean in the north to the Mediterranean sea, the Black Sea, and the Caucasus Mountains in the south.

Geographers considered Iceland, the British Isles, the island Republic of Malta and thousands of other island that lie off the European mainland to be part of the continent.

Europe’s longest river, the Volga, flows 3,531 kilometre through Russia to the Caspian Sea. Canals link the Volga with the Arctic Ocean, The Baltic Sea and the Don River.

Europe is a huge Peninsula that extends westward from the North Western Asia. No body of water separates these two continents completely, and so some geographers considered them to be one continent, which they call Eurasia.

Other geographer say that Africa, Asia and all Europe from one continent because land connected Africa and Asia before the Suez canal was built. They call this continent Eurafrasia.

French Alps : The Alps are the highest mountain belt in Europe. They extend, in South Central Europe, from the gulf of Genoa to the Danube River in Vienna.

The craggy peaks of the French Alps, pictured here, provide some of the world’s best skiing near Mount blanc, France.

Jutland, Denmark : Jutland, open sula on the European continent, from the main body of Denmark. Jutland features a varied landscape, ranging from imposing cliffs on the east coast to dunes and meadows in the West.

This picture portrays an outdoor scene in Central Jutland.