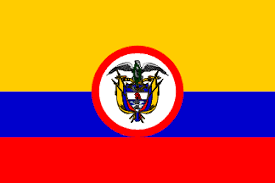 Colombia’s flag, adopted in 1861, has a yellow Strip for the golden New World, a red stripe for the blood shed for independence and a yellow stripe for the Atlantic ocean.

The coat of arms, adopted in 1834, is topped by a Condor. It shows a promegranate, horns of plenty, a liberty cap and the Isthmus of Panama ( once part of Colombia ).

The country is bordered by Panama, which divides the two bodies of water, on the north West, Venezuela and Brazil on the east and Peru and Ecuador on the south.

It’s area of 440,831 Square miles more than twice the size of France includes the san Andreas y Providencia archipelago, located off the Nicaraguan cost in the Caribbean, some 400 miles northwest of the Colombian mainland.

The population is largely concentrated in the mountainous interior, where Bogota, the national capital, is situated on a high plateau in the Northern Andes Mountains.

The lofty snow- tipped peaks of the country’s interior cordillears tower high above equatorial forest and savannas where surviving Great Indian group still follow the life ways and traditions of their ancestors.

In the cooler mountains, at intermediate elevations, modern cities are juxtaposed with traditional rural land-scapes where mestizo farmers cultivate their small plots of coffee, corn and other crops.

The economy is traditionally based on agriculture, particularly coffee and fruit production, but industries and services are gaining in importance.

Flowers are also an important source of income. Colombia is the most populous nation of Spanish-speaking South America.

More than one-third of its inhabitants live in the sixth largest metropolitan areas, of which Bogota is the largest.

Mining accounts of for only a small part of Columbia’s income. But its importance is rapidly growing. Petroleum and coal are major exports. Colombia also has large reserves of natural gas and iron ore.

Busy Madellin : Although Madellin has captured attention because of its role in the Colombian drug trade, there is much more to the city of more than a million people.

It is is a bustling industrial metropolis that produces most of Columbia’s textiles. Four universities, several seventeenth and eighteenth century churches, and a City Centre that blends old and modern architecture provide rich cultural elements.

It then crosses the country to empty into the Caribbean Sea near the city of Barranquilla, in north-western Columbia, after following a course of about 1540 kilometre.

Bogota sites at an altitude of about 2640 metre in Central colombia on the sabana de Bogota, a valley in the cordillera Oriental of the Andes. The city consists of a modern section with skyscrapers.