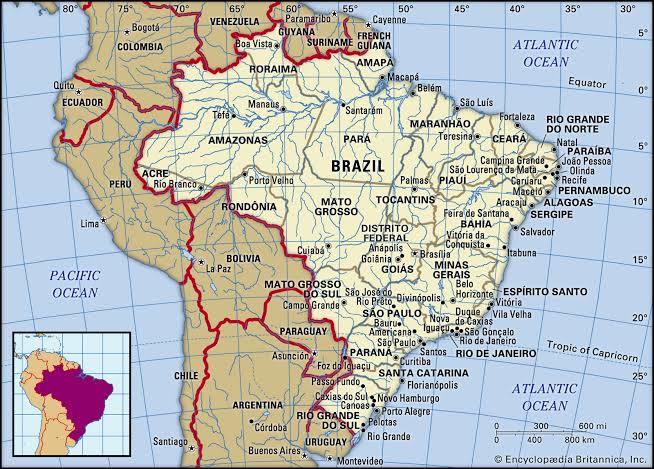 Facts In Brief About Brazil

the Brazilian flag bears the Motto order and Progress. The green and Golden-yellow colour symbolises forest and minerals.

Blue and white are portugal’s historic colours. Brazil coat of arms commemorates the birth of the Republic on November 15,1889.

It is country of South America. It is the fifth largest country in the world, exceeded in size only by RUSSIA, Canada, China, and the United States.

It also borders on every nation of the South America continent except chilli and Ecuador specifically, Uraguay to the South; Argentina, Paraguay and Bolivia to the Southwest.

Peru to the west; Columbia to the Northwest; and Venezuela, Guyana, Suriname, and French Guiana to the north.

Most of the inhabitants of Brazil, to world’s fifth most populous nation, are concentrated along the eastern seaboard.

Its national capital, Brasilia. Planned from scratch, Brasilia replaced Rio de Janeiro as the capital in 1960.

Brazil is unique among the nation of the Americas; this former colony of Portugal did not become fragmented into separate countries, as did the British and Spanish possession, but retain its identity through the intervening centuries and a variety of forms of government.

The sheer extent of Brazil’s primary resources has made its economy, despite its relative lack of development, one of broad International significance.

It is one of the world’s leading agriculture nation and is especially well known as the world’s most prominent coffee producers.

Brazil is also important for what it has not yet fully exploited its vast mineral and hydro electric potential, its hardwood forests

And millions of acres of soils, most of which could be fertile given adequate water and Brazil also has taken a significant place among the world’s industrial producer.

The city of Sao Paulo has become one of the world’s major industrial and commercial centres.

Brazil has the largest steel plant in Latin America and the manufacture of metal products is the nation’s chief industrial activity.

Landmarks of Rio de Jeneiro : Much of the city of Rio de janerio, in Southeastern Brazil, lies between mountain and water.

The statue, built to commemorate Brazil’s first hundred year of Independence from Portugal, seems to get over the city toward sugar Loaf mountain, a bear granite rock rising out of Guanabara bay.

Carnival In Brazil : Carnival, the world famous unhabited Brazilian festival, runs for the four days and nights before ash Wednesday, which markes the start of the Lenten season.

For More Article related to Political of Countries :