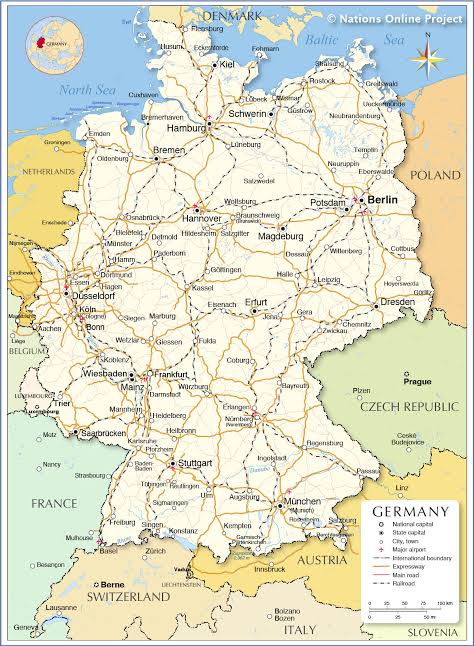 Facts In Brief About Germany

The German flag has strips of black, red, and gold; these colours have been associated with German unity since the 1800’s.

The coat of arms tareefan eagle Emblem and has been used since the ancient Romans introduced it into Germany.

Germany is the seventh largest country in area in Europe. It is major country of North-Central Europe. Germany is bordered by nine countries.

Denmark to the north, the Czech Republic and Poland to the east, Switzerland and Austria to the south, and France, Luxembourg, Belgium, and Netherlands to the west.

The official capital is Berlin. Area 137,827 square miles. Several major rivers and canals traverse the country and have helped to make it transportation centre.

Germany, major industrialized nation in Central Europe, a Federal Union of 16 States (Lander). The country has a total of 82,424,609 people .

Germany has a mild climate, largely because the land is near the sea. In winter, the sea is not so cold as the land. In summer, it is not so warm.

German is overwhelmingly urban, and the most people lead a prosperous, comfortable lifestyle, with adequate leisure time and comprehensive social welfare benefits.

Berlin is the capital and the largest city, although Bonn, which was the provisional capital of West Germany, is still home to some government offices.

The principal language is German. Germany has a very large and modern industrial economy and is a leading producer of products such as iron and steel, machinery and machine tools and automobiles.

Germany’s highest point is Zugspitze (2,062 m) in the Bavarian Alps. Major cities in this area include Stuttgart and Munich.

After World war-II (1939 to 1945) Germany was separated into two parts: the Federal Republic of Germany in the west and German democratic Republic in the east.

In 1990 the two-part were reunited Amid great celebration from people of the East and the West.

Holstein Gate Of Lubeck : The city of Lubeck, in Northern Germany, served as the prosperous capital of the Hanseatic League during the middle ages.

The twin-towered Holstein Gate a section of the massive fortification that once surrounded the city is a cherished remnant from the era.

Hamburg, Germany : The port city of Hamburg Germany, lies on the Elbe River near the north Sea. The city was extensively rebuilt after most of it was destroyed during World war II.

In the foreground is a monument dedicated to Prince otto Otto Bismarck. Bismarck was the first chancellor of the German empire, ruling from 1871 to 1890.

More Blogs Related To This Topic :