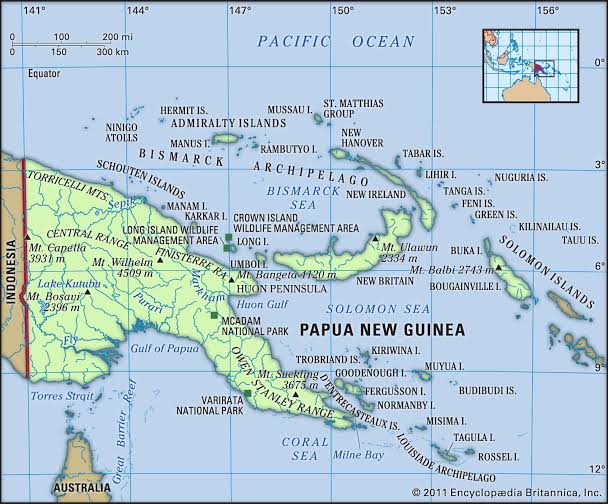 The flag is divided diagonally from upper left to lower right. A golden bird of paradise is in the upper section, which is red.

Five star representing the southern cross appear in the lower section, which is black.

Papua New Guinea is an independent country located in the Pacific Ocean, north of Australia. It was formerly the Australian Territory of Papua and New Guinea.

It became self-governing in 1973 and independent in 1975. It occupies the eastern half of a New Guinea, the second largest island in the world.

The Western half of the island is Irian Jaya, a province of Indonesia. Area 178,704 square miles.

The capital is Port Moresby. Papua New Guinea has six major land regions. The backbone of the main Island is a large chain of mountain ranges.

These Mountains are Papua New Guinea highest peaks. The important natural resources of water, soil, grassland, forests and minerals in Papua New Guinea are extremely variable both in quality and quantity.

Nearly all the people in Papua New Guinea are farmers who grow their own food and obtain Other goods they need from the forests.

Papua New Guinea nationals operate most of the cattle farms. Beef cattle and grazed in most of the provinces, because beef has become a popular food.

Farmers also keep dairy cattle and pigs. Production of gold is on the increase as it becomes more scarce in other part of the world and as its value rises.

Small deposits of other minerals, including lead, iron, nickel, Chrome, Manganese and low grade coal, have been reported.

But none have been of commercial interest. Petroleum and natural gas exploration has resulted in the discovery of seven gas field in the gulf district.

Two of them are offshore fields in the gulf of Papua.

The entire Solomon Island chain extends about 1450 kilometre and includes Island under the jurisdiction of Papua New Guinea.

The island are mountainous, with heavily forested volcanoes rising steeply from the coastlines.

Spirit House on the Sepik : About half of the people in Papua New Guinea practice ancient religions tradition that include ritual celebrating and ancestors and spirits.

No women are allowed into the traditional spirit house, located in a village on the Sepik River. When boys reach a certain age, they are initiated into manhood; only after this initiation mein they enter the spirit house.

More Blog’s Related To This Topic :