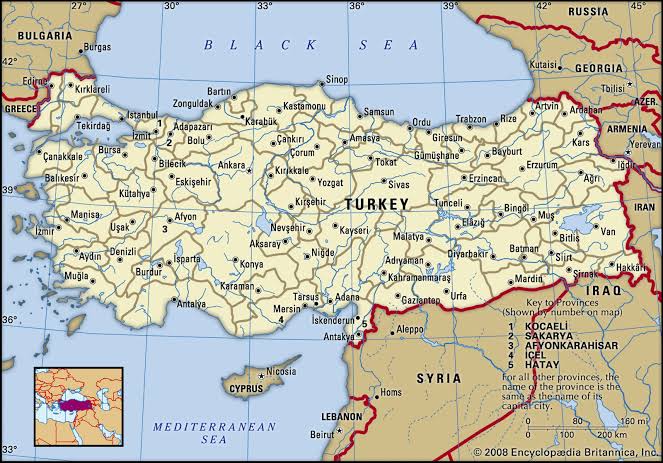 Facts In Brief About Turkey

Turkey’s flag was adopted In 1936. The crescent and five pointed star are traditional symbol of the Islamic faith.

The capital is Ankara. Turkey is bordered to the north by the Black Sea, to the east by Georgia, Armenia and Iran, to the South by Iraq, Syria, and the Mediterranean sea, and to the west by the Aegean sea, Greece and Bulgaria.

The Asian part of Turkey, which is called Anatolia, is separated from the European part, Thrace, by the Bosporus, the sea of marmara, and the Dardanelles strait.

Area 300,948 square miles. Turkey have several large salt water lakes and numerous rivers. But most of the rivers dry up during the country’s hot, dry summers.

In the spring, many rivers becomes torrents as water from the melting snow rush down from the mountains. Turkey has a developing economy.

Today, Turkey has over 30,000 fafactories. But agriculture remaian an important economic activity.

It provides jobs for about 58 % of the country’s workers. However from output account for only about 20% of the value of all good and service product in Turkey.

Wheat is the chief grain, followed by Barley and maize. Large amount of cotton are grown for both fibre and cottonseed seed oil.

Tobacco, a major talkies export, is grown along the coasts of the Black and Aegean seas.

Turkey is rich in mineral resources, but the mining industry is largely undeveloped. The country’s most abundant mineral is coking coal, which is used in steel making.

Turkey is one of the world’s largest producer of chromite, the mineral from which chromium is obtained.

Farming Beneath Mount Ararat : A Farmer walks across a valley below Mount Ararat, Turkey’s tallest mountain.

Located in the Nation’s North East near the point at which Turkey, Armenia and Iran coverage aryarat is 5,137 metres high.

A generation ago, more than half of the Turkish people lived in rural areas and were involved in agriculture.

Windswept Nemrut Dagi : Nemrut Dagi is a mountain which overlooks of was deserted landscape in Adiyaman in South Central Turkey.

Topped by the burial mound of Seleucid king Antiochus I, the dramatic setting is dotted with the monumental heads of deities and the king that gaze out into the distance.

The tomb of Antiochus, a Successor to Alexander the Great, is reputed to contain great wealth, but has never been found.

Izmir : The city of Izmir, located at the head of the Gulf of Izmir, is one of the chief seaports of western Turkey.

For More Blog’s Related To This Topic